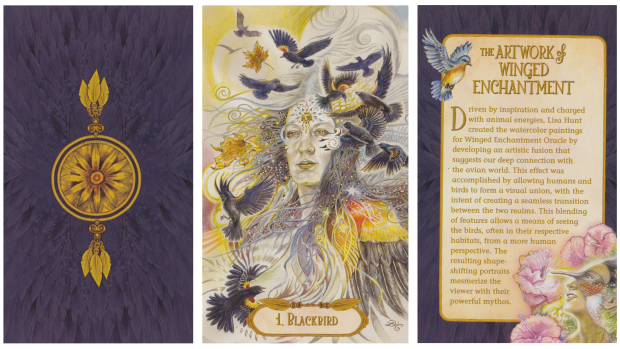 The deck has 39 cards plus an illustrated black&white LWB with accompanying messages for each of the cards. The cards are a bit large, coming in at 3.5″ by 5.75″, but that’s pretty standard for oracle decks. It is an ongoing concern for me and my tiny palms though. Get a good grip on it and shuffling goes smoothly, I like that the cards lean towards matte rather than shiny. They feel a bit thin, so I worry about wear, but a bit of care can go a long way so that can also be managed. The back of the cards are fully reversible, fitting in with the bird motif with what looks like card #1, the blackbird’s, feathers. It’s gorgeous. 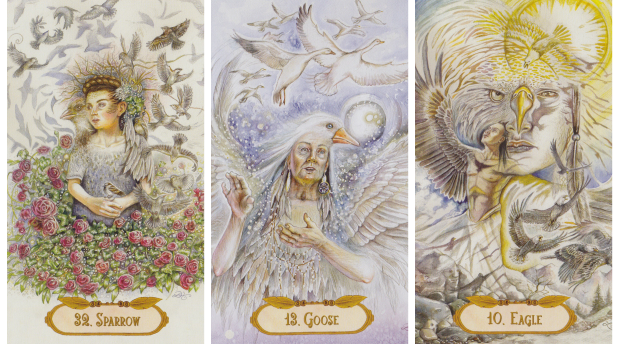 The imagery is striking, composed primarily of a shape-shifting hybrids of people and birds. The best part about these cards is that for a lot of them you can’t tell in which direction the shift is going- bird to human, human to bird. The images also include rich symbolism, sometimes to rich, as it can start to feel as if there’s too much going on in one image to begin to parse. At first glance I found it overwhelming, but taking some care to sit with and consider the art did the job, and I found myself intuiting the overall message of the book even before glancing at the LWB. The other great thing about the richness of the deck is that there’s even more to find for yourself that’s not in the LWB. Speaking of the LWB, It’s in first person for the most part… i.e., the corresponding bird in the card’s message always starts with: “I am Turkey…” which I found a bit eye-roll inducing. If you can get past that, or not even be bothered by, the rest of the message is usually apt and insightful. They even include a four line piece to meditate on. I would say this is a deck that reads really well. 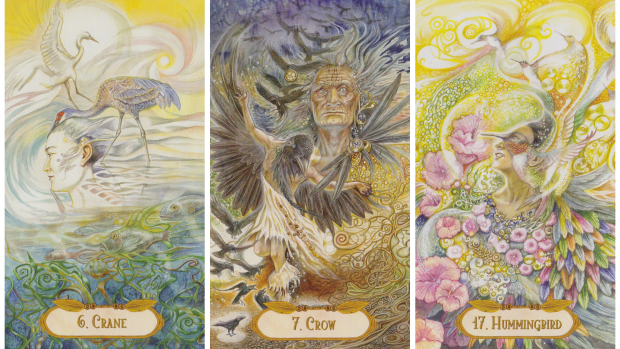 I enjoy the variance in the art. From straight up gorgeous to startling and striking. I would call this a queer deck, as gender fluidity or rather ambiguity is present, and not just because everyone’s part bird. I also like that there’s age variance as well, cards featuring youthful and elderly beings. There are visibly POC (people of color) characters in the deck. Though it can feel a bit tokenizing, especially with cards like ‘Crane’ with an Eastern Asian presenting person and ‘Eagle’ for the Indigenous American presenting person. This is somewhat redeemed by cards like ‘Hummingbird’ above which include a POC in a non-tokenizing fashion but those instances are far and few in between so no full marks for inclusivity. 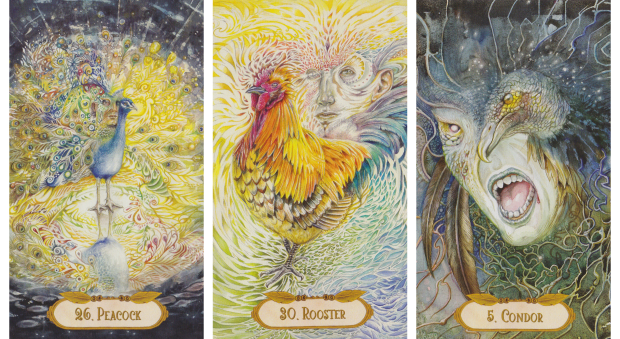 I like this deck, and while I’m not going to use it everyday, it doesn’t do very well with daily oracle card draws, it is a great one to use with particular questions. It handles spreads rather well. Despite it’s flighty subjects, it has depth and groundedness at times though not so much that I expect practical solutions from it. Creatives and dreamers will love using this deck. If you’re the more down to earth, practical type it might be harder to mesh energies with, but hey. Try it, it might be just the kind of energy you need in your life. I’d recommend this to anyone who is looking for a functional oracle deck that has tarot style potential- which for me means further than daily one-card draws.