You know I’ve never had a deck straight up tell me that our relationship is most likely temporary, perhaps only for now, not gonna last. I’ve never been pre-dumped by a tarot deck before.

I was excited to meet the Morgan-Greer Tarot. Its colors are rich, and excitingly it’s borderless, and it’s a much-touted deck for Rider-Waite readers who like just a bit of a change in their art, as long as it remains mostly faithful. Now I don’t claim to be attached to Rider-Waite standards, but I’ve always thought it a useful system to have down, even as I like to take the art for my own perspective most times. To my original point, I was looking forward to this deck. Till I asked it to tell me about itself, and well… it did.

It was odd. A bit uncomfortable. 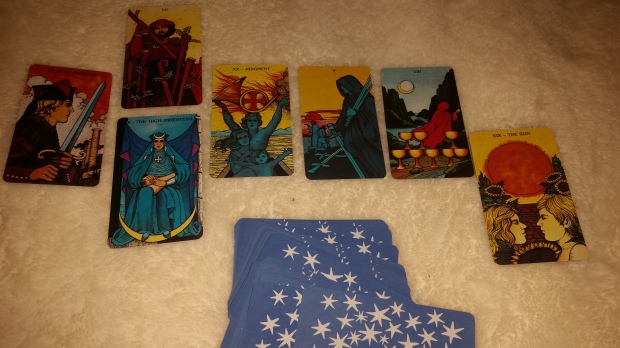 1.Tell me about yourself. What is your most important characteristic?
PAGE OF SWORDS – The very LWB succintly describes a youth “observing the principles of power”. Obviously, this is not a deck I’ll come to with questions such as, “What should/do I do?” given a particular situation. It’ll just look at me. Tell me what’s going on. Leave the answers to me. I can work with that though, a deck to tell me what it sees that I may be missing. It will notice both the towers upright in the card, and the one that’s fallen down, almost out of focus in the frame. I’m okay with that.

2. What are your strengths as a deck?
7 of WANDS – This is a very “You wanna go?” card, especially compared to the first card. Well I guess if it’s been watching, I can be made ready for challenges and negating forces because I will be given ideas of what the situation is? The guy on the card is focused, keeping watch for what may come. Okay.

3. What are your limits as a deck?
2 THE HIGH PRIESTESS – Really? I’ll admit my bias toward this deck came about when it set its limits with one of my favorite cards. Though it’s not lying to me. It’s already said, stillness and watchfulness are what it does. It feels like a reinforcement of, no seriously, observation is my priority wheelhouse and you won’t get all the answers from me, whether or not I may have them.

4. What are you here to teach me?
20 JUDGEMENT – Literally the last step before THE WORLD. So says she: You’ll be able to see all, as I lay it out, but then you have to decide what to do with it. Do you open or close yourself to the situation. You decide. I sure won’t tell you what to do.

5. How can I best learn to collaborate with you?
5 of SWORDS – Do you see what I mean? Though I suppose it’s nice, to  have a deck say, be as selfish as you like here. I see everything anyway, so let’s not pretend I don’t see your dark sides. Sometimes a little self-interest is good. It can also mean dishonor if taken too far… now do I want to return the swords or take them? It’s that moment before the choices are completed, that’s where the watchfulness of this deck bears fruit.

6. What is the potential outcome of our working relationship?
8 of CUPS – BYE! My emotional relationship with this deck doesn’t seem like it’s going to be lasting any kind of long. Even the moon in the deck seems to be waning, with that last bit of light as the short time I have with this deck.

And just in case, I thought I was overreacting, I asked for a clarification on the outcome and received…

THE SUN – “Liberation from limitation”. Now granted, either one phase of my journey with this deck will be over and we’ll finally be able to move into a different rhythm or… it will move on to someone else who won’t find its limits so, well… limiting.