Continuing off of the discussion of working plant magic according to the season, here we go with another winter favorite, Holly.

Deck the halls with boughs of holly!

Though often pictured in close up, to catch the perfect frame of glossy leaves and ripe red berries on a branch, the holly tree is actually quite lovely as a whole, and useful too. Holly, also known as Holy Tree, is one of the winter season’s most popular plants.

The berries of the holly plant, much like the mistletoe’s, can be dangerous, and are considered serious emetics. Holly leaves and bark are somewhat safer and have been used for tea. Holly tea is thought to improve blood’s circulation and soothe the drinker; they are also diuretic. It is also used for cleansing, which physically is just a fancy word to say holly is purgative and laxative. Think dandelion root.

Christians, Druids, and Romans recognized holly as spiritually important. Romans crafted “boughs of holly” during important winter festivals. Just about all of the Christmas songs have a mention of dear holly, also known as Christ’s Thorn for its thorny leaves and bloody berries that were said to spring up in his footsteps. Druids harvested the berry and bark for their uses. Its bark was, and is still, often used for power channeling wands, a history J.K. Rowling twigged in the Harry Potter series.

Holly carries protective energies. Often planted or harvested to ward against negative energies and malevolent spirits. It is also used to symbolize and invoke power, particularly that of cyclic transformation- death and rebirth, often mentioned during the winter to spring cycle, especially in tales of the Holly King.

Popular and easy to find fresh at this time, consider Holly for your winter herb magic needs! 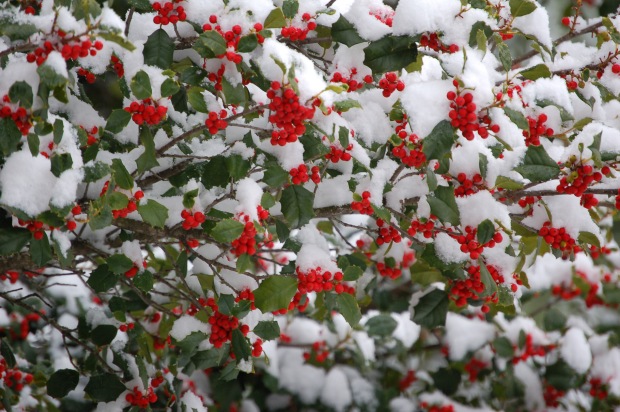 Hi, I’m Asali! I’m a Black queer femme earthworker passionate about tarot, tea, and healing work. Schedule a card reading with me for a deeply clarifying intuitive tarot session. You can also find me on Twitter, Facebook, and Instagram, drop me a line!