A new moon in Capricorn, while Mercury is in retrograde. It’s a whammy. 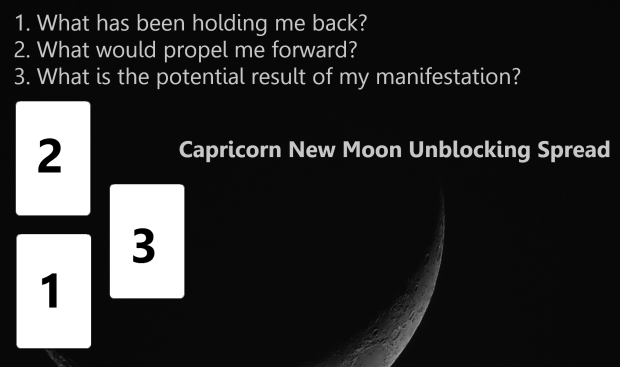 However no reason it should be shaded in anything but powerful positivity- a time to move forward and cast your line.

In that spirit, I worked with a spread I created for manifestation. There are a few other decks I could have used for this one, but stepping into new paths always terrifies me so I chose my most loving and gentle deck, The Mythical Goddess Tarot. 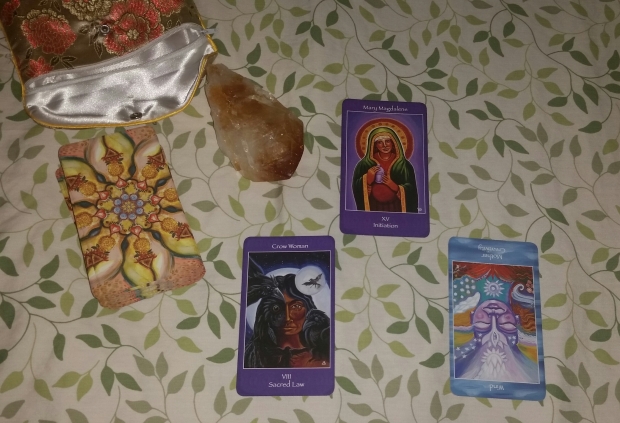 1, What has been holding me back?
MOTHER OF WIND (CREATIVITY) [reversed] – Well that’s a bit hard to swallow. I’ve been holding myself back. I need to remember to say YES to myself with more frequency and freedom, and then do something about it and let something of my vision come forth. You know I did a reading for Libras for Siobhan’s Mirror Capricorn tarotscope, and it was all about releasing control and going forward with vision. When old spreads come to haunt you!

2, What would propel me forward?
CROW WOMAN (SACRED LAW) – Immediate message received from this card in this position: honor yourself, what you see, what you envision, let that truth take flight. Sacred truth is sacred law, and am I not (are we all not) sacred? Speaking of Libras, the LWB says “Crow Woman is Libran balance and justice” and urges me to honor my “genuine essence in alignment with [my] highest understanding of sacred truth”. Best part is I hadn’t even read this card’s LWB page before I got the Sacred Truth or Libra’s message. Love.

3, What is the potential result of my manifestation?
MARY MAGDALENE (INITIATION) – Trying not to distract myself by focusing on the fact that 15 in the Major Arcana is usually The Devil, and that’s rarely a positive outcome! I was actually playing a song about release from shackles and bonds as I worked this spread, so it’s ironic that I pull a card that’s usually about just that. Then again, this is a deck that transforms a lot of the usual traditional readings of cards, so what does it mean to revision Major Arcana XV as something to look forward to? As initiation? Mary Magdalene, known for being villainous by those who could not see her, eventually held pride of place, preparing Jesus for his ascension (though it was an ascension that involved a trial by fire, He literally had to defeat the shackles of death before He could return to his highest vibration).

You know you pick a deck because it’s the gentlest of your decks, and it turns out to be the one that leaves you thinking, a tightness in your gut and thrill of excitement in your breastbone.

Blessings, may all your 2016 visions come to fruition!