“A friendly desert community where the sun is hot, the moon is beautiful, and mysterious lights pass overhead while we all pretend to sleep. Welcome to Night Vale.”

For those who may not recognize some of the most popular lines of the Welcome to Night Vale podcast (go have a listen!), WTNV is a popular podcast written by Joseph Fink and Jeffrey Cranor. It is filled with surreal story lines built around a  radio host, Cecil, who may or may not be a figment of his own imagination reporting on the daily news of his creepy hometown, Night Vale, all the while falling in love with a newly arrived scientist shaking things up, Carlos.

It is partly because of this base that the deck makes my Tarot of the QTPOC list as the world the tarot deck’s artist, Hannah Holloway, is directly inspired by is full of queer, gender non-conforming, and poc characters.

END_OF_DOCUMENT_TOKEN_TO_BE_REPLACED

Listen. I will be throwing all my coin at Noel Arthur Heimpel when their Numinous Tarot is ready for sale. All of my coin. To emphasize that, here is an updated post on what’s cooking for this deck.

Identifying as a “queer, genderfluid trans person,” Noel is committed to creating work that reflects them and their community. They do this brilliantly in the Numinous Tarot, with incredible art that takes the breath away. 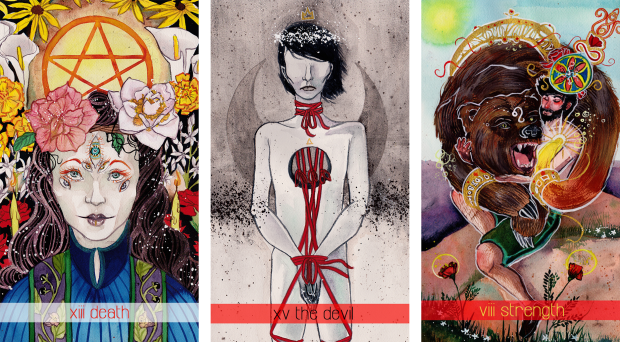 Storytelling is my foremost passion, and my most heartfelt mission is to create stories which contain a huge variety of people, especially those with underrepresented identities–specifically, stories which are not about those identities. There is a distinct need for stories in which everyone gets to be a full person with experiences outside of being queer or confronting other “identity narratives.”  [source] 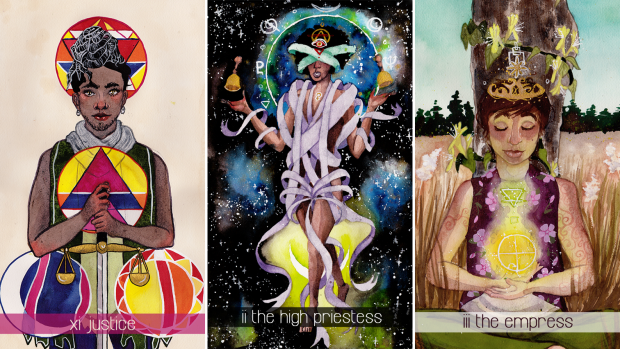 I learned of this stunning deck around six months ago, when the idea of compiling a list of tarot decks that reflected images of my identities was just buzzing in my head. I did a quick post; at the time Noel was just working their way through a stunning set of Major Arcana.

Since I last posted on this deck, Noel has revamped some of the design, particularly around the card titles, and gone on to create for the Minor Arcana. Their suits are charming and perfectly aligned with the world created here: with Bells (Swords), Tomes (Pentacles), Candles (Wands), and Vials (Cups).  They hope to be ready for ordering in early 2017.

The art in this deck almost guarantees that you’ll see something of yourself reflected back in its cards, acting as gateways to a glorious magical queer imaginary. There is space in the magic for you in particular, this gorgeous deck sings out.

I see femme of center people, disabled people, trans people, black people, poor people, poly people, non-binary people, queer people, old people, young people- I see me, you, us; I see our community thriving and in command of our magic.

In the Numinous Tarot, and other decks that do this work, I see the reality of being able to create ourselves in beauty as self healing work- as Noel did in their self-portrait as Queen of Tomes. How absolutely powerful is that? 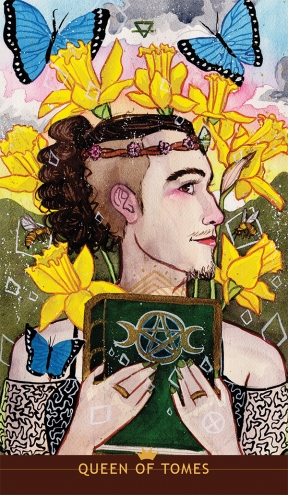 “there is space in the magic for you in particular…“

I hope to see this deck published with an accompanying book, but just in case it doesn’t I highly recommend you follow Noel on Tumblr, Instagram, Twitter, and particularly Patreon so you can not only get background knowledge on their perspective on these tarot cards but you can also support, materially and emotionally, them in the completion of this important sacred work.

Patreon patronage also supports Noel’s other artwork like their webcomic, Ignition Zero,”with over 300 pages and a diverse cast of characters, including two asexual-identifying” main characters. It is updated weekly and is free to read.

[all image credit to Noel Heimpel]

It has taken me far too long to get to this deck. Some of it is that I felt that everyone was aware of it, some of it is that horrible procrastination bug, and a good chunk of it was being sick and not having the energy to assemble the post like I usually do.

All that and a paralyzing hope (which I say more about below).

So without further ado, The Slow Holler Tarot.

END_OF_DOCUMENT_TOKEN_TO_BE_REPLACED

Continuing my Tarot of the QTPOC series. Thank you to Beth from The Little Red Tarot for your lovely shoutout!

First things first, yes I know it’s not called The Haitian Tarot. Work with me here.

This is a deck that has made the rounds, even going as far as mainstream getting an article in The Guardian. An article, by the way, whose very title exhibits why I took so long to even be able to write about this deck. So I’ll be brief and to the point about it.

The production process of this deck makes me very uncomfortable. I can’t change that just as much as I can’t stand it. I’ve spent a whole lot of time wishing that a person of color was behind this, receiving the bulk of credit (and let’s face it, profit) from the project.

I also know that had it been a person of color, particularly a Haitian black person, there’s very little chance this deck would have gotten the kind of mainstream buzz it had (just think about the kind of publicity indie decks by POC artists are getting, or rather not getting). It doesn’t make it right, but if not for Alice Smeets and her reputation and connections, this deck might not have made it this far- at the complex of privilege and allyship.

Remembering that it means that this has given liberal white organizations and individuals some kind of carte blanche to write endless think-pieces on the word “Ghetto” and remark on its ‘beauty’ and ‘depth’ and ‘resilience’ as portrayed in this deck. People who are quiet after the news cycle forgot Haiti, as European nations interfered with its prosperity, as Haitians were kicked out of their homes in the Dominican Republic.

To echo all the Black voices who’ve come before me, I wish the world loved Black people as much as they love Black culture.

So I have enjoyed this deck vicariously through photos around the internet, visited the Atis Retizans page to learn more about them and their incredible work to find ways to support them directly. Told myself to ignore the little decklust demon that kept asking me to purchase the deck.

It kept nagging at me, there is a deck out there with mine and my people’s face on it, and I can’t even completely revel in that rarity. How messed up is that?

Much deliberation and hemming and hawing and the bottom line is, I can’t ignore a deck with beautiful black faces, proud in their artistry. So I’ll focus on the Atis Rezistans, and their incredible creativity, their fierce reclamation of the ghetto, the genius of their composition, and the magic of Black people everywhere. It’s a deck that definitely belongs on the Tarot of the QTPOC list. It captures the beauty of Haitian artistry, culture, and tradition.

Grand Rue is the main avenue that runs a north-south swathe through downtown Port au Prince from Bel Air and La Saline to La Cimetière and Carrefour. At the southern end of Grand Rue, amongst the labyrinthine warren of back streets that line the avenue, is an area that traditionally has produced small handicrafts for the ever-diminishing tourism market. This close-knit community is hemmed in on all sides by the makeshift car repair district, which serves as both graveyard and salvation for the cities increasingly decrepit automobiles.

All the artists grew up in this atmosphere of junkyard make-do, survivalist recycling and artistic endeavour… Their work references their shared African & Haitian cultural heritage, a dystopian sci-fi view of the future and the positive transformative act of assemblage…Their work is transformative on many different allegorical levels, the transformation of wreckage to art, of disunity to harmony and of three young men, with no formal arts training, to the new heirs of a radical and challenging arts practice that has reached down through both modernist and post-modern arts practice.

[all tarot images from The Ghetto Tarot, which I will always refer to as The Haitian Tarot]